Frisco, Texas is known for big dreams, big plans, and big actions. So, it’s no surprise that the City of Frisco and the Frisco Independent School Board have added another notch to the belt of big partnerships.

On June 1st, the Frisco City Council approved a master development agreement (MDA) for the design and development of a Performing Arts Center in Frisco’s Hall Park.

In a public statement, Mayor Jeff Cheney said, “This is something our community has been dreaming about for years.” And true to the city’s reputation for innovative public-private partnerships, Frisco is once again pulling out all stops to turn this decade-long dream into reality.

The Frisco ISD has been working on the concept of a world-class performing arts center for over a decade. After withdrawing from a joint venture in 2011 with Plano and Allen due to voter disapproval, FISD continued building a vision for a state-of-the-art facility where students could practice their visual and performing arts. Preston Hazzard, FISD’s managing fine arts director sees the new Performing Arts Center as a multi-functional facility, hosting campus musical performances, UIL events, and district visual exhibitions.

Others see an additional opportunity for the new facility to attract regional and national events, possibly even theatre and musical performances you might expect at the AT&T Performing Arts Center in Dallas or Broadway in New York.

Current plans call for a multi-purpose performance hall owned by FISD that seats up to 1,250 people, plus a smaller city-owned venue that seats 250 people. Located in Hall Park off Warren Parkway, the Frisco Performing Arts Center will face Ford Center at The Star and be surrounded by a 5-acre ‘Klyde Warren style’ park with open green space and playgrounds. A parking garage with 1,100 spaces is also part of the planned development.

Once agreements are finalized, the planning phase for the Performing Arts Center kicks into gear in January 2022 with the construction of the 5-acre park starting later this year.

Funding for the Performing Arts Center 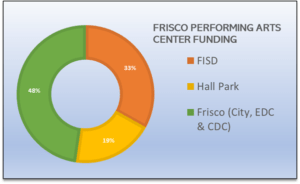 Funding is provided through public funds and private investments. Frisco ISD is kicking in $43 million from a 2018 voter-approved bond.  Developer Craig Hall is providing $25 million in funds in addition to gifting the 5-acres where the facility and park will be located.

The remaining $62 million is provided by the City of Frisco, and Frisco’s Economic Development and Community Development Corporations.

How to Protest Your Denton & Collin County Property Tax Assessment