After years of delays, Frisco finally has the green light to build a green space as grand as Frisco.

Frisco Grand Park has something for everyone

With plans to live up to its name, Frisco’s Grand Park is big enough to give even NYC’s Central Park a run for its money. With designs that pull in concepts from some of the best parks in the country, Grand Park will have plenty of room to roam.

Want a place nearby to energize your weekend? Hike on one of the multiple winding trails coming to the park. Feeling like a more relaxing evening outdoors? Maybe grab a picnic spot right by the lake after a fun family afternoon at the arboretum. There’s also a dedicated kid’s play area, plenty of trails, performance stages, a festival hall, and even a boathouse in the master design plan. Grand Park’s sprawling 1000 acres of continuous land is located in the city’s heart, just west of Dallas North Tollway, snuggly tucked between Cotton Gin Road and Stonebrook Parkway and easily accessible to all Frisconians. 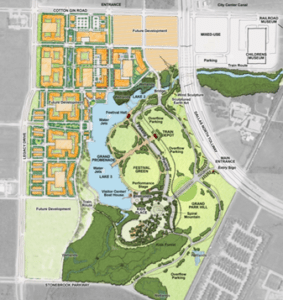 No one is more excited about this project than Mayor Jeff Cheney, who has been invested in it for well over 15 years. “In my opinion, 20 years from now, when people think of Frisco with all the great things that are here, this will be number one on the list as far as why people love living in Frisco and love visiting Frisco. This park will have so much that you couldn’t expect to experience all of it in a single day or, maybe even a single week.” His enthusiasm doesn’t stop there; he and the city have plans in the works to make this one of the top park destinations in the nation. With words so inspiring, you must wonder why it has been delayed for so long.

A long delay is finally over

Back in the ’60s, the people of Frisco welcomed Exide Technologies with open arms to build its battery recycling plant. But the benefits to the numerous residents it employed came with a pretty steep price. Not long after its arrival, EPA declared that the area around the plant was one of the few that failed to meet the new air quality standards. The plant had been poisoning both the air and soil with lead emissions. Millions of old car and industrial batteries were recycled on-site, and all of the toxic byproducts had been dumped in the nearby grounds and Stewart Creek. Take a small little hike down that creek, and you end up right by the lake, smack in the middle of the location for Grand Park.

The city had eagerly negotiated with Exide to take ownership of the land for the hefty cost of $45 million under the condition that the company would decontaminate the area, but negotiations were long and tedious. Legal battles between the city and the company have delayed the park’s development for the past two decades.

Frisco’s negotiations finally reached a conclusion last October when the contaminated property was officially transferred over to the city for the price of $29 million. “I didn’t think it would take ten years from when I started to get to this point, but it is a relief,” Meghan Green, who led a grassroots effort to close the Exide plant, said.

The residents of Frisco can finally see the light at the end of the tunnel! “Sure, we wish it would be open today but, looking forward, it’s going to be here sooner than people realize,” Mayor Cheney added. The people of Frisco will get their beautiful grand park, and the toxic emissions contaminating the land and water will be eliminated in the next 5-7 years.

The city hopes to break ground by the end of 2021 and is confident Frisco’s Grand Park will be worth the wait!

If your family is considering a move to Frisco, let us show you around! Call us at 214-597-2985 to schedule a time that’s convenient for you.

14 Steps to Sell Your Home – Home Selling Process for Success